Shania Twain Duets With a Horse for Stable-Side Performance at ACM Presents: Our Country

For many of the artists who appeared on Sunday night's ACM Presents: Our Country concert, couches, living rooms and bedrooms served as the backdrops for their at-home performances. But then Shania Twain appeared.

Decked out in a red sweater and some ripped blue jeans, Twain sat outside of her stable, with her dog and a large blonde horse watching her closely. The star reassured her fans that, eventually, everything was going to be OK.

"These are crazy times, but we're gonna do what we always do and pull together to get through it," Twain told those watching from home before her performance. "Because, let's face it, we're all in this together."

The country star then launched into an acoustic verse of the appropriately titled "Honey, I'm Home," giving fans the relatable lyrics they were craving about just having a hard day, singing, "Honey, I'm back, my head's killing me/ I need to relax and watch TV/ Get off the phone, give the dog a bone/ Hey, hey, honey, I'm home."

For good measure, Twain also delighted her fans with a rendition of "Man! I Feel Like a Woman," as if letting fans know that, don't worry, soon we'll all be "going out tonight." Even the superstar's horse seemed to be into her songs, rubbing up against her face and even licking her strings at one point. 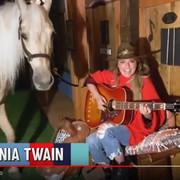 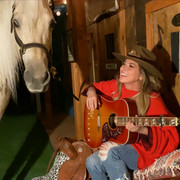 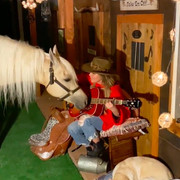 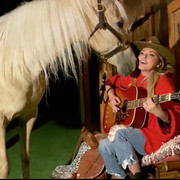