Want to see the highly anticipated movie “Trading Paint” before it hits the movie theaters on March 22nd, today, Friday, February 22nd is your lucky day, an early release is available today on Ultra Video On Demand and on iTunes and Amazon. The movie will be in theaters and available On Demand on March 22nd.

Here is the iTunes link

Here is the Amazon link

A down and out stock car racing legend (John Travolta) is drawn back to the dirk track when his son (Toby Sebastian), an aspiring driver, joins a rival racing team, which sparks an intense and dangerous competition between father and son.

After a failed race due to shoddy equipment causes a rift in a legacy racing duo led by Sam and his 20-year-old son Cam, alternate career options become more attractive to the young racer. As the father of a baby girl and husband to a beautiful wife, Cindy, Cam longs for a brighter future for his family as well as his career. Rival racing giant Bob Linsky (Michael Madsen) presents a path to this reality for Cam, forcing him to confront his place within his family’s racing history and the place of his own life.

Sam is off the old school; he values strategy and sportsmanship in racing. He urges his son to race with integrity and berates him when he feels that hasn’t been done. Cam, on the other hand, wants to win. It’s all he thinks about, and he’s willing to do anything on the track to get him closer. This difference in values amplifies the generational gap between the two and leads to conflict when Cam reveals that he has agreed to race for Linsky.

Family trauma is resurrected as Sam larks on the family’s lives before the death of Cam’s mother years prior. These memories begin to haunt Sam just as tensions between him and his son increase; after Cam and his brand new car beat Sam and his clunker in a casual race, he finds himself bereft of a racecar and on worse terms with his son. Sam leans on his girlfriend Becca (Shania Twain) in response.

The tables begin to turn as Sam takes first place in the first races of the season. During the third race, an accident causes Cam’s car to collide with Sam’s, sending his son flipping down the racetrack. In the hospital, Sam learns that Cam will never walk again due to the crash. The two reconcile after Cam apologizes and Sam affirms his love and support for his son. As the final race approaches, Sam announces his retirement. Cam, too, is out of the races, but not for long as he begins to regain feeling in his toes. Soon he’s racing again, against his former boss Bob Linsky. Cam is triumphant in this final race, and thanks to his father heartily in his acceptance speech.

Producers Andrea Iervolino and Monika Bacardi said that this film required an actor with incredible range, as the story of TRADING PAINT is rooted in the high-speed danger of dirt track racing, but it’s also a story that is very much character driven. “For something that requires this type of range, you better have an actor who can deliver, and we have one of the all-time greats in John Travolta, who we are very excited to work with,” Monika Bacardi stated. “There is nothing John cannot do, and he proves this time and time again with every project he’s involved in.”

“This was John’s first time racing on a dirt track,” said Iervolino. “He put in the time to train and proved he was a natural. We put him out there with other professional dirt track racers as well for some of the scenes, and he really held his own. Talladega is an inspiring location to film, and you can feel the history and grit of the track. It’ll inspire any driver who gets out on it.”

John Travolta brought a fun, lively atmosphere to set. Country music sensation, Shania Twain, who plays Travolta’s girlfriend in the film, stated that she thought she was going to be really intimidated going onto set, but it ended up being a lot of fun. “It feels really natural for me,” she said. “I wasn’t nervous at all. I was surprisingly comfortable. And I know that has a lot to do with John." Travolta spoke highly of Shania, saying “I think Shania is born to be on film. Her videos say that. I mean, come on. Her videos are a knockout!”

Shania Twain isn’t the only singer on set – she revealed that Travolta “sings on the spot all the time.”

"Of course if I want to create an effect on others, I will break out into a familiar song,” Travolta laughs. “For instance, these cars [on the dirt track] are all lined up, and there's a bunch of guys and girls around the cars, and I'm in front of them, and I thought, if I broke out into Greased Lightning right now, I bet it would cause a very good effect. So I did the whole thing... well the whole crew, everyone went crazy. It was the perfect set up."

Iervolino praised Travolta's talent and demeanor on set: “Having someone as talented and driven as John on set really lends itself to the story,” he says. “He’s very powerful in his scenes and his chemistry with the other actors is so natural and effortless. It really makes this story come to life in ways we couldn’t have predicted.” 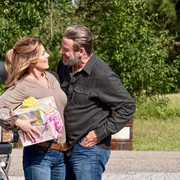 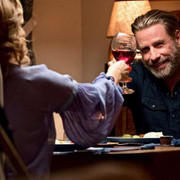 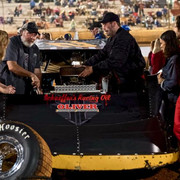 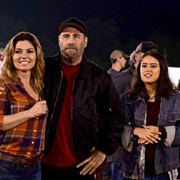