Twain told “Live With Kelly And Ryan” co-hosts Kelly Ripa and Ryan Seacrest on Monday at Paris Theater that she is in informal contact with at least a pair of long-running Vegas headliners.

Seated on a sofa across from Twain, Seacrest opened the dialogue with, “So many people have residencies here, and work here all the time, and we have Carrot Top coming on the show. I picture all of you guys getting together and having tea …”

Ripa cut in with, “Do you guys have a secret club?”

Twain laughed and said, “There is something about this town, it has a very casual feel. Carrot Top will call me up and say, ‘Let’s have lunch …’”

Ripa jumped in again, “Wait. Carrot Top calls you on the phone?”

“Does he have a prop phone?” Ripa asked.

Twain went on, “David Copperfield and I will go out, at about midnight or 1 o’clock in the morning. I really like David, and he’s hungry so I have to cook him something.”

“You cook for David Copperfield?” Ripa asked, again to laughter.

“The meat has to be very well-cooked,” Twain continued, undaunted.

“It has to be well-cooked?” Ripa said, her voice rising. “Doesn’t he, like, cook it with his eyeballs?”

Twain was a guest to promote her upcoming residency at Zappos Theater at Planet Hollywood, which opens Dec. 6. She was among the guests on “Live With Kelly and Ryan” during the quartet of shows taped Sunday and Monday at Paris Theater. The otherwise moribund theater was enlivened by the full-scale production (a stage set adorned with Caesars-styled statues and a Rat Pack-styled bar) and four full houses.

Magician headliner Mat Franco of Linq Hotel, Chrissy Metz of “This Is Us” and Howie Mandel recorded two shows Sunday. Monday it was Twain, along with a performance from Wynn Las Vegas production “Le Reve”; and also Christina Aguilera, followed by Carrot Top.

The Metz/Franco show aired Monday morning. The show featuring Mandel, who headlines Paris Theater on Nov. 30, airs Friday. The others are to be announced, as ABC continues its live coverage of impeachment proceedings.

Aguilera told Ripa and Seacrest her residency show, also at Zappos Theater, was a “five-sensory” show. “You can smell strawberries, you can smell fire,” she said.

Ripa turned to Seacrest and said, “We need sensory in our show.”

Carrot Top won over the audience with his “Neighborhood Watch” sign prop. “Watch the neighborhood? They can’t even watch their own signs!” He closed by laying down on the stage and pulling up a collapsible orange traffic cone — for people who have partied too much in Las Vegas and passed out.

Incidentally, Carrot Top shares the all-time record for most appearances on “Live” with the late Joan Rivers, with 33. His relationship with the show dates to the days when Regis Philbin and Kathie Lee Gifford co-hosted.

“I still have to catch myself,” he said Monday night. “I call it ‘Regis and Kathie Lee,’ and I almost did it again today.”

The woman on the horse who looked like Twain on the Fremont Street Experience on Monday night, was. She wore a flowing white dress while recording a promotional video as the crowed amassed behind metal barriers. Details to follow, but it was quite a thing. 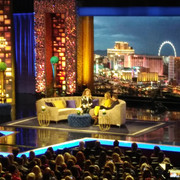 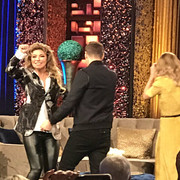 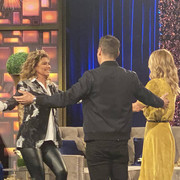 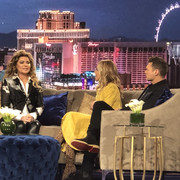 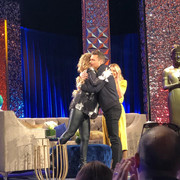 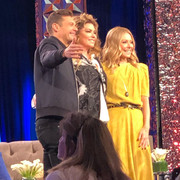 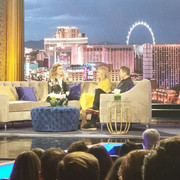 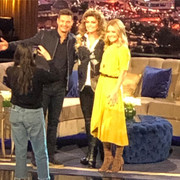